Home / Meaningful Accomplishment / How to Be an Obstacle Blaster

Recently I came across the following status update posted by a Facebook friend:

“I grew up with a stern and often angry parent. It affected me to the degree I’m often stern and admittedly too often angry — It has sometimes caused me, and I’m sorry to say my family, problems. While I believe on the whole I’m a nice guy and a loving husband and father, I can be hard. I believe my firmness can be a strength but I could happily do without the problems it sometimes creates. My question is can you relate? And can a tiger change his stripes?”

Frankly, I was a little astonished by this because it is so very rare for someone – especially a man – to so publicly admit to weakness. To then close out with a request for input made the paragraph even more extraordinary.

His post inspired me to share a little of my story with him and, by extension, the two dozen or so others who had read and posted their own supportive comments after his post.

That’s what vulnerability does! The person who took the first risk gives others permission to reveal something of their own weaknesses, faults or failures. Taking risks inspires and motivates others to do the same and, in the process, such risks become less scary, less risky.

More on risk in a minute. First, a few words about tipping points that trigger change.

We don’t see or feel the little trickle that triggers a flood, or the little rumble that initiates an earthquake, or the little rolling rock that starts an avalanche, or the slight adjustment that makes for a major course correction. But those seemingly minor moments that lead to untold destruction and chaos, or to revolutionary positive life changes, had their quiet start in the space of a little moment.

That is the way it is for all of us, as it is for my Facebook friend who asked if a tiger can change his stripes. Not only do we have the capacity for massive personal change and improvement, we need to take comfort in the fact that it is easier to make happen than most of us realize.

When we lament that change is so difficult, we are repeating one of the only effective lies that ensures change will never happen. Change, in fact, is not difficult. My Facebook friend is proof. For in taking the risk of being vulnerable and in asking for feedback, personal improvement – however slight it might be – had already begun for him. And he is the only one who can limit where it leads.

I have another friend whose brother, David Curry, was recently hired to be the new President and CEO of Open Doors USA, a non-profit organization that provides Bibles and many other resources to people in some of the world’s most oppressive countries where persecution of people of faith is the rule rather than the exception.

The founder of the organization, Brother Andrew, now in his 90’s, began smuggling Bibles behind the Iron Curtain during the darkest decades of the Cold War and later into Muslim countries where people are routinely killed for departing from their Islamic faith, or even for being in possession of a Bible. Living under extremely high risk conditions – as in risk of death – has been “normal” for most of this man’s long and productive life.

David has told the story of what it was like to meet Brother Andrew for the first time. It happened not too long ago at the elder gentleman’s home in the Netherlands. David would not be staying long. Arriving from the States, a car took him to the outskirts of Amsterdam.

He said the whole thing was surreal, like something out of an epic movie. Curry and Brother Andrew had a warm greeting and, after some small talk, went for a walk down a long, quiet unpaved road. They exchanged stories and shared details of their lives.

Isn’t it interesting that, despite the differences in the particulars of our life stories, how many things we often find that we still have in common with each other?

David said that as they walked back to the house, without saying it to each other, they both seemed to feel reassured at how similarly they are in their way of thinking about so many things. This seemed to settle on the two of them like a general unspoken knowing. He said that in the space of an hour or so it felt like they had become old friends. Without any awkwardness, they walked in silence for a little while. The only sound between them was the crunch of gravel under their feet.

Nearing the house, David thought to himself how he would say goodbye to his patriarch. Reaching the front door, and not thinking of anything better so say, he put his hand on Brother Andrew’s back and told his new old friend to take care.

To David’s surprise, the old man stopped and turned to face him. The elder leader looked squarely in David’s eyes and shook his head. With a slight smile and a somewhat defiant tone, the 92 year-old man said, “No, David. I will not take care.”

Explaining that his entire life has been punctuated with, and defined by, risk and risk-taking, he matter-of-factly declared that he had no intention of changing that outlook any time soon. He said he will not take care and he urged the new torchbearer of his legacy to do the same: to live dangerously, to take risks, and to lead by that example. Brother Andrew told David: “Do not take care. Take risk.” 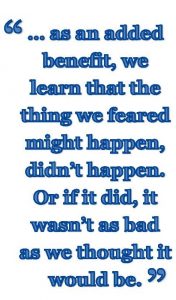 That sage advice will stay with him for the rest of his life. Me too. Hopefully you as well.

Let’s go back to my Facebook friend who publicly revealed that he struggles with some things and, wondering if change is even possible, asked for feedback. Apparently unaware of the little rock that he got rolling, the beginnings of the change he longs for are contained in the risk that he took. Tigers cannot change their stripes, but yes, men and women can change. I can become a better version of myself… and I am, all the time!

Massive change is much easier than you may have been led to believe, for it is a mere step or two per day. Change is in the awareness of a need… and then a willingness to take steps…  and then deciding to take steps… and then in the first little step.

Something really cool happens when you “go public”. You find that others are more like you than you would have thought. You find that people are supportive. You find that your vulnerability is rewarded by others being willing to open up because you created “safety” when you did. In the instant you realize the exposing of your weakness actually helped give strength to others, you get some of your own strength back.

Look, life is but a series of countless moments within which we have the privilege to make potentially life altering decisions. Ones that take us in a completely different or new direction obviously feel the most risky and dangerous. But even when those risky decisions don’t work out the way we hoped, we often end up not regretting it and, as an added benefit, we learn that the thing we feared might happen, didn’t happen. Or if it did, it wasn’t as bad as we thought it would be.

The sighing moment of resignation followed by the breathless uttering of a Yes after a lifetime of saying No, is a revolutionary moment for anyone that experiences it. It is a risky moment. Exhilarating and terrifying at the same time. But in spite of all the stress, it is worth it.

How to be an obstacle blaster: do not take care. Take risk.

Invitations. That’s all we’re talking about. As we go about our daily lives, relating with... Read More

“I think sports teaches you a lot about yourself.” She ought to know. That’s Lindsey... Read More

When someone sheds new light on something, do you usually feel better or worse? Of... Read More