Home / Better Relationships / Forgiveness Q & A – How Many Times? 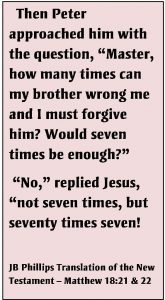 Q:           I remember a story in the Bible where Jesus was asked how many times we should forgive the same person. He said you should forgive hundreds of times. This is one of the reasons I do not believe in the Bible. How is there any wisdom or practicality or boundaries in continually forgiving someone who obviously isn’t serious about changing enough to stop hurting others?

That said, I believe the passage you refer to has been the focus of a lot of misunderstanding. A common assumption is that Matthew 18:21 & 22 is giving advice about forgiving someone who asks to be forgiven. But the question about whether or not to forgive, and how many times to forgive, is not connected to the contrite attitude of the wrong-doer. Not at all.

A startling number of people out there believe that we don’t even need to consider whether or not to forgive someone unless and until the person who wronged us has asked to be forgiven. Forgive me for saying so, but that is an absurd position to take!

If the other person is not burdened with guilt about their real or perceived offence, and you are burdened with anger, bitterness, or hard feelings of any kind toward them, then you are the one who needs to be released from the weight of this negativity.

With that understanding – and given the fact that it is within your power to choose to no longer hang on to the grudge – how much sense does it make for you to wait for the person who wronged you to come to you and ask you to do what you have always had the ability to do all by yourself? You can forgive anytime you choose to do so. 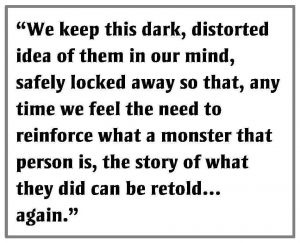 If you require that forgiveness depends upon the other person, you are making it about them. In fact, forgiveness is only about you. No one else.

For some, this might elicit the image of one person who is constantly hurting, offending, taking advantage of, and betraying another person… and for the person on the receiving end of all this nonsense to be constantly forgiving the wrong doer. This is where the question suggests it would not be wise or practical to be close enough to a person that so routinely causes pain. I don’t think anyone would disagree with that.

But herein is the source of another misunderstanding.

The issue of boundaries and boundary setting is the subject of another article. For now, let’s agree that it is not healthy to be close to someone who is causing constant pain.

So, you may ask, ‘If there is distance and limited contact – even no contact – between me and the offending person, how would there be opportunity for them to keep causing me any more pain so that I would need to contemplate continual forgiveness?  Is there a scenario where I may still be called upon to forgive the same person hundreds – even thousands – of times?’

Yes, there is. In your thoughts.

You see, every time you think of the original offence that caused pain, if it has not been forgiven and released, you have actually experienced the offence again… and now the wound is worse than before because this new pain has been added to the pain that was already there.

And now we begin to believe the lie that the offender, and what the offender did, is even worse than they really are and what they really did. We believe it because our memory of the person and the events remain fresh by our mental retelling of the narrative over and over again. And usually the fresh retelling includes permanent conclusions that we have drawn about the person that did us wrong.

When we freeze the wrong doer in that “offender” state, we have turned the person into an object. In our mind, that person’s existence is limited to the pain they caused us. They are no longer a real person with a life that includes hurts and disappointments and successes and regrets of their own. We don’t think of them in that “real person” way anymore. We keep this dark, distorted idea of them in our mind, safely locked away so that, any time we feel the need to reinforce what a monster that person is, the story of what they did can be retold… again.

This goes on… and on… and on when we choose not to forgive.

Over the course of many years, how many times does the mental movie of pain and offence get replayed? 490 times? At least.

More and more experts are tracing a growing list of diseases and disorders to the anger and bitterness associated with unforgiveness.

So, let’s say you do go ahead and forgive the person shortly after (or it could be years after) the pain-causing event occurred. For quite some time into the future, you are likely going to remember that person and/or what they did and the pain you experienced. And if you dwell on it too much, you will begin to feel the same hurt feelings all over again. For your own health and happiness, what must you do in that moment? Forgive again.

Every time the opportunity arises, forgive again. How many times? Seven times? No, seventy times seven.

Resources On the Unforgiveness/Disease Connection:
Harbouring feelings of bitterness ‘increases the likelihood of physical disease’
Bitterness Can Make You Sick
Unforgiveness and Cancer
How Anger Hurts Your Heart
CNN Article Says Unforgiveness, Anger, Bitterness Can Ruin Your Health

“Look, I didn’t mean to start an argument. And I don’t know why you’re all... Read More

Forgiving a Monster This, like Part 1, has the Q & A in inverse. In... Read More

This is an equal opportunity phenomenon, experienced by both husbands and wives. To be sure,... Read More