This, like Part 1, has the Q & A in inverse. In other words, I’ll ask the question and you provide the answer.

Friends, I’d like to introduce you to a friend of humanity, Eva Mozes Kor (pictured to the right), the Auschwitz survivor who sparked a controversy in 1995 when she publicly forgave the Nazis for their genocidal crimes.

As a little girl at Auschwitz, Eva Mozes saw and experienced horrific things. Within less than a minute of their arrival at the most infamous death camp, she and her twin sister were separated from their parents. They never saw their parents again.

As twins, they were considered ideal test subjects for the most grotesque and perverse experiments the Nazi “researchers” could imagine.

Her entire story can be seen in the documentary film Forgiving Dr. Mengele.  I’m hoping you see the film, so I don’t want to talk too much about it. I highly recommend it. It truly isn’t horrible to watch. Actually, it’s hopeful.

Here are a few words by way of preview…

One day in recent years Eva realized that choosing not to forgive someone for what they’ve done to cause pain and/or offense is equal to choosing to continue to be a victim. When she considered this, she found to be repugnant the idea that she’d be a victim of the Holocaust for the rest of her life. She was a victim at one time, but she chose to put all that in the past and to keep it there.

Before it occurred to Eva that she could forgive, she said, “I had no idea that I had the power to forgive the Nazi’s. No one could give me that power and no one could take it away.”

When asked what forgiveness means to her, without hesitation, she forcefully asserts that “whatever was done to me, it’s no longer causing me such pain that I cannot be the person that I want to be.”

Remember, that’s what forgiveness means to her. Some folks will read the above and say, ‘Well, I am able to be the person that I want to be without forgiving. She’s obviously saying that you should forgive if it’s causing problems for you. It’s not causing me any problems, so I don’t really need to forgive.’

Wrong. Eva is saying the opposite. If you refuse to forgive, you’re allowing the pain of whatever you are not forgiving to prevent you from being the person you are capable of being.

In short, because unforgiveness is a voluntary tie to the past, it stands to reason that if you don’t forgive others, you cannot be the person you were called to be… in the present as you move forward into the future. You’re living and reliving the past every time you think about the person who hurt or disappointed you.

That’s not being the person you want to be. That’s giving power to that other person for what happened in the past far into the future. What a waste.

And that is most certainly causing problems for you because, as has been mentioned in previous articles, the problem is rarely limited to one person or one situation.

So, there it is. Do you really want to put someone else in charge of when and under what circumstances you fully take charge of your life… if ever it is to happen?

Here’s a better question for our Q & A: If Eva Mozes Kor could forgive, what’s your excuse? 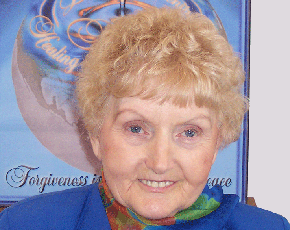 Eva Mozes Kor is a survivor of the Holocaust, a forgiveness advocate, and a revered public speaker. Powered by a never-give-up attitude, Eva has emerged through a life filled with trauma as a brilliant example of the power of the human spirit to overcome. She is a community leader, a champion of human rights, and tireless educator of young people.

Spend enough time around little children and you will see them misperceive something they have... Read More

What if I told you that I have a tool that, when used, will help... Read More

The fact is that we have a choice as to what we carry around with... Read More

I am a parent. And if, from that statement, it isn’t apparent that I fret... Read More