Someone said something to me recently that I really struggled with. I actually got irritated at the audacity of these words. Although the remark didn’t initially sit right with me, I withheld expressing my disagreement with it, but I know my body language signaled how unnerved I felt about someone saying something so definitively “black and white”.

Mind you, it wasn’t a comment aimed at me, personally. It was just something that struck me as antagonistic, “in your face” and uncompromising. The thirteen words he spoke came across as very dogmatic. Here’s what was said: “Until you get your facts straight, you aren’t authorized to have an opinion.”

See what I mean?

Again, the person who said this was speaking generally, not directing the comment to me about anything I had said or done. It was a generic statement to anyone expressing an opinion… when the person doing so does not know all the facts.

After a day or two of stewing about it, it finally occurred to me why I was instantly irritated with those thirteen words. It was a double whammy. First, I knew in my heart that what my friend said is true, but it was stated in a way that seemed too brash and condescending (but it was still true and I knew I’d have to deal with it). And second, anytime an un-yielded right gets exposed, it is, well, irritating. Irritating to my inner spoiled brat, that is. I’ll explain.

First, yes it’s true: Until you get your facts straight, you aren’t authorized to have an opinion.

Authorized by who? Everybody. That’s who.

Let’s think about this. The dirty little secret of opinions is that they are usually expressed by people who literally haven’t a clue what they are talking about. They do not have their facts straight. However, we listen without judgment because, after all, it’s just an opinion, right?

And unfortunately, too often, you and I engage in this lazy habit ourselves(!) when we ought to be enquiring about the credibility of the opinion being voiced. And we should also refrain from expressing our own point of view unless and until we know the facts of the matter ourselves.

What am I really describing? Gossiping, rumor-mongering, and backbiting. See, when I put it that way, sharing opinions with others doesn’t sound quite as innocent and innocuous, does it? When you harbor and/or share “information” and when your perspective about someone or something lacks a complete picture of the situation, you’re really not rendering an opinion at all. You’re dealing with gossip and rumors. That’s all.

Here’s a proposition. Imagine how it would be if every time someone shared their “opinion” about something with someone else, the ‘someone else’ spoke up and assertively, but diplomatically, asked whether the purveyor of the “opinion” really knows all the relevant facts of the matter. What do you think the answer would be (if they answered back honestly)? Of course, it would be No.

What, then, is the value of such an opinion (if it can be called an opinion at all)? 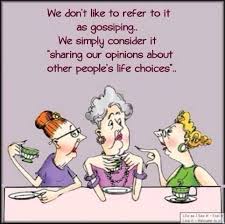 So, who authorizes opinions? Who decides whether your point of view on a certain matter is a genuine opinion to be taken seriously, versus a mere rumor or morsel of gossip? Everyone who cares about integrity and credibility. That’s who. The universe of people that deserve to know the truth and, thereby, make sound judgments about what they learn. That’s who. Pretty much everybody. That’s who.

Do you want to have a reputation as someone with integrity and credibility? This is a good place to start: make sure you’ve got your facts straight well before you decide you’ve got an opinion. And make it a rule of life…

Become known as someone who constrains himself or herself by choosing to live by the above three-part rule and you’ll likely gain a reputation for having integrity and credibility.

So, the first reason I reacted the way I did: I knew my friend’s declaration is 100% true and I knew it the moment I heard it. In the next post, I’ll explain why it ticked me off so much, which is the second reason I had such a visceral reaction to what my friend said.

By way of preview: that’s where my inner spoiled brat comes in, and the business of un-yielded rights.

For now, let those definitively “black and white” thirteen words stew with you for a couple days:

“Until you get your facts straight, you aren’t authorized to have an opinion.”

It was one of those light bulb moments. A few of us were sitting in... Read More

Words mean things. Sometimes lots of things! This is to say that practically every given... Read More

I was twelve years old. It was springtime and the school year was winding down.... Read More

It’s just another day in the mind of… a mind. The average mind. There’s a... Read More